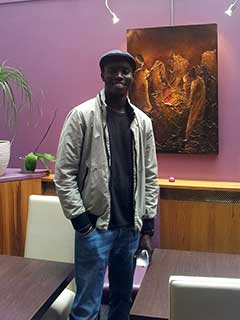 The painter and sculptor Daouda Diakhaté, born in Sénégal, is now living and working in Lille (France). He belongs to this new generation of artists for whom frontiers, as well geographical as artistic, do not exist.

This can be seen in his works where the influences of his homeland and those of occidental art form an original and perfect mix.

The artist's earliest works are quite clearly influenced by African art, in warm earthy colours and a genuine stylisation easily recognizable.

But since, the influence of the European artists of the fist half of the XXth century appears distinctly.

The composition and the use of cut-and-paste technique reminds of the works of Paul Klee,or even of Pablo Picasso, but the colours palette definitely remains of African inspiration.

The original personality of Daouda Diakhaté's works is the result of this duality.